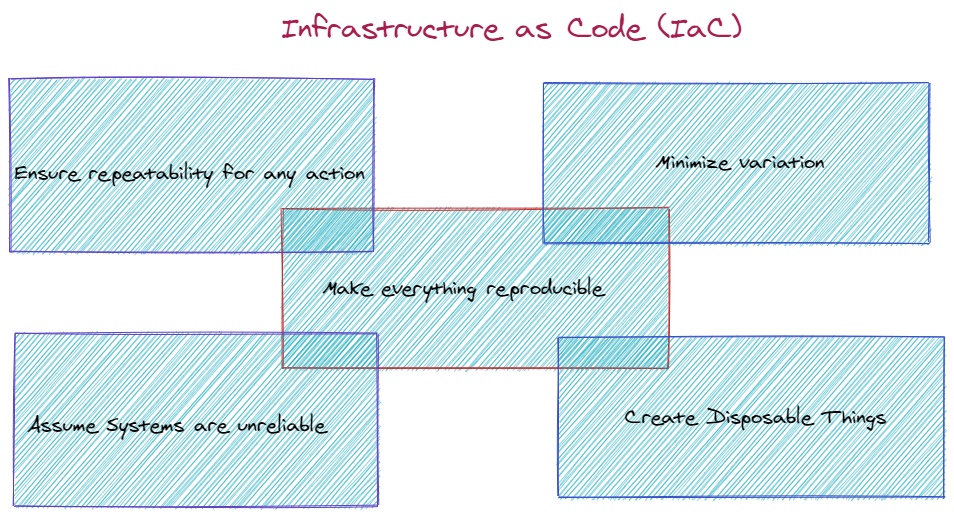 Infrastructure as Code (IaC) is the automation approach to defining, provisioning, configuring, and managing infrastructures. If you are developing services at scale today, chances are you already very well know what IaC is. It’s become a core practice in today’s cloud age where microservices are prominent, release cycles are shorter and teams deliver small changes rapidly.

In the past 5 years, I’ve had a fair interaction with IaC, the first on a team where we used Chef to configure a fleet of VMs in the data center. Eventually, as services moved to the cloud, our team used Terraform. My next team used Cloudformation for our services on AWS and my current team uses Ansible for our Azure infrastructure.

One thing I learned here is how these tools vary in terms of their capability of configuration management vs provisioning, creating mutable vs immutable infrastructures, language styles- imperative vs declarative, community support, and overall maturity. Moreover, I realized that even though the tools for IaC change, the fundamental paradigms that contribute to having a successful infrastructure as code remain the same. Recently, I read the book Infrastructure as Code by Kief Morris and several concepts from the book focused on how teams can optimize their IaC for change and were interesting enough that compelled me to share some notes here.

The book sets the premise by distinguishing between the Iron age (static pre-cloud systems) vs Cloud age (dynamic cloud-native systems) of infrastructure. Kief illustrates the 5 key principles to understand when working with IaC for your infrastructure:

The recoverability of a system depends on the ability to rebuild its parts effortlessly and reliably. The effortless part here refers to eliminating the need to make any decisions about how to build things by defining configuration settings, dependencies, and software versions as code.

In addition to allowing failed systems to recover, reproducibility also ensures consistency, availability, and scalability. It creates psychological safety against risk and fear of making changes, allowing teams to handle failure with confidence. One pitfall is that often, teams can find themselves dealing with a snowflake which is an instance of a system or part of a system that is difficult to rebuild. A snowflake system is one when the team is not confident to safely change/ upgrade it or fix it when broken. Such a system can be replaced by writing code that can replicate the system, running the new system in parallel until it’s ready.

One of the main ideas of cloud-native software is making the pieces of your system malleable. A system that is itself dynamic allows teams to gracefully add, remove, start, stop, change, and move its parts. This creates operational flexibility, availability, and scalability.

As a system grows, it gets challenging to understand, change, and fix it. Low variations result in more manageability as it’s easier to manage one hundred identical servers than five completely different servers. For example, variations can be in terms of having multiple OS, application runtimes, databases, or having multiple versions of these.

Principle 5: Ensure that you can repeat any process

The principle of repeatability builds on the reproducibility principle. Teams should be able to repeat anything they do in the infrastructure. Embracing automation is key to repeatability. One of the core features of effective infrastructure teams is their strong scripting culture. Ideally, if you can script a task, script it.

The technology stack, tools, or platforms vary from team to team or company to company. Therefore, having a model for thinking about the high-level concerns of a platform, its capabilities, and the infrastructure resources required to provide these capabilities is crucial.

At this point, we can agree on how diverse and vast the infrastructure domain is today. Teams have to work with these resources and services to arrange them into useful systems to build the ‘infrastructure’ part of IaC. IaC in the cloud age is based on three principles:

Kief has a very good deep dive into the core principles for an infrastructure that can change rapidly and reliably. This article summarizes the 1st principle- Define everything as code. By defining everything as code, teams can leverage speed to improve quality. Some candidates in the system that can be defined as code are- the infrastructure stack, the elements of a server’s configuration (packages, files, services, user accounts), configurations for ops services, server role, server images, validation rules (automated tests and compliance rules), etc. Idempotency is an important characteristic of IaC. Idempotent code means re-running it any number of times will not change the output or outcome.

Similar to any other code, infrastructure code (except unencrypted secrets like passwords & keys for obvious security reasons) should leverage a version control system (VCS) as it provides benefits like:

I can attest to these benefits as I often find myself referring to our infrastructure code in the repo to check on configuration details, incremental history, who changed what, etc. instead of navigating the cloud portal.

As with software engineering, infrastructure code needs to maintain the code quality. Keeping the codebase clean, easy to understand, test, maintain, and improve is vital to making updates and evolving the infra systems easily and safely. Two key implementation principles to understand are:

Infrastructure stack and its patterns

Infrastructure Environments are a group of software and infrastructure resources collectively serving a specific purpose. In today’s fast-paced tech world, it’s a defacto to have multiple environments (testing, staging, production, etc.) also referred to as “path to production”. The most common is TEST-> STAGING-> PROD. There are a few factors that determine the differences in these environments:

A common pattern is to have multiple Production environments to provide several benefits- Fault tolerance, Scalability, and Segregation. These systems are identical which means the infrastructure in each environment needs to be consistent. This is a key factor for the adoption of IaC as inconsistencies in environments can create risks of inconsistent behaviors.

Modularity is a fundamental software design technique that emphasizes removing redundant implementations and simplifies implementations. Small pieces are easy, safe, and faster to change than larger pieces. How can we apply the same to our infrastructure code?

Designing components in a distributed scalable system can be tricky. It’s the art of deciding which elements of the system to group, and which to separate. Doing this well involves understanding the relationships and dependencies between the elements. Two important design characteristics of a component are coupling and cohesion. Coupling describes how often a change to one component requires a change to another component. Cohesion describes the relationship between the elements within a component. The goal of a good design for the infrastructure code is to create low coupling and high cohesion.

To make a composable system, make independent pieces. It should be easy to replace one side of a dependency relationship without disturbing the other.

The SRP says any given component should have responsibility for one thing. The idea is to keep each component focused so that its contents are cohesive.

To achieve better reusability, components should be designed around domain concepts. For example, instead of designing a generic server implementation, the design is based on the domain- application server, build server, etc.

This is the principle of least knowledge, a component should not know how other components are implemented. This rule pushes for clear, simple interfaces between components.

IaC is the industry defacto to manage dynamic infrastructures allowing organizations to make changes frequently and reliably. It is a mainstay of good DevOps practice. Practicing successful IaC means applying the same rigor of application code development to infrastructures.